Chapters and verses of the Bible

The Bible is a compilation of many shorter books written at different times by a variety of authors, and later assembled into the biblical canon. Since the early 13th century, most copies and editions of the Bible present all but the shortest of these books with divisions into chapters, generally a page or so in length. Since the mid-16th century editors have further subdivided each chapter into verses – each consisting of a few short lines or sentences. Esther 8:9 is the longest verse in the Bible. Sometimes a sentence spans more than one verse, as in the case of Ephesians 2:8–9, and sometimes there is more than one sentence in a single verse, as in the case of Genesis 1:2.

As the chapter and verse divisions did not appear in the original texts, they form part of the paratext of the Bible.

The Jewish divisions of the Hebrew text differ at various points from those used by Christians. For instance, in Jewish tradition, the ascriptions to many Psalms are regarded as independent verses or parts of the subsequent verses, making 116 more verses, whereas established Christian practice treats each Psalm ascription as independent and unnumbered. Some chapter divisions also occur in different places, e.g. Hebrew Bibles have 1 Chronicles 5:27–41 where Christian translations have 1 Chronicles 6:1–15.[1] 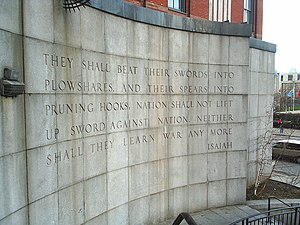 "...they shall beat their swords into plowshares, and their spears into pruning hooks: Nation shall not lift up sword against nation, neither shall they learn war any more." ~ Isaiah 2:4 KJV (Bible verse across the street from the United Nations Building in New York City)

Early manuscripts of the biblical texts did not contain the chapter and verse divisions in the numbered form familiar to modern readers. In antiquity Hebrew texts were divided into paragraphs (parashot) that were identified by two letters of the Hebrew alphabet. Peh (פ) indicated an "open" paragraph that began on a new line, while Samekh (ס) indicated a "closed" paragraph that began on the same line after a small space.[2] These two letters begin the Hebrew words open (patuach) and closed (sagur), and are, themselves, open (פ) and closed (ס). The earliest known copies of the Book of Isaiah from the Dead Sea Scrolls used parashot divisions, although they differ slightly from the Masoretic divisions.[3] (This is different from the use of consecutive letters of the Hebrew alphabet to structure certain poetic compositions, known as acrostics, such as several of the Psalms and most of the Book of Lamentations.)

The Hebrew Bible was also divided into some larger sections. In Israel the Torah (its first five books) were divided into 154 sections so that they could be read through aloud in weekly worship over the course of three years. In Babylonia it was divided into 53 or 54 sections (Parashat ha-Shavua) so it could be read through in one year.[3] The New Testament was divided into topical sections known as kephalaia by the fourth century. Eusebius of Caesarea divided the gospels into parts that he listed in tables or canons. Neither of these systems corresponds with modern chapter divisions.[4] (See fuller discussions below.)

Archbishop Stephen Langton and Cardinal Hugo de Sancto Caro developed different schemas for systematic division of the Bible in the early 13th century. It is the system of Archbishop Langton on which the modern chapter divisions are based.[6][7][8]

While chapter divisions have become nearly universal, editions of the Bible have sometimes been published without them. Such editions, which typically use thematic or literary criteria to divide the biblical books instead, include John Locke's Paraphrase and Notes on the Epistles of St. Paul (1707),[9] Alexander Campbell's The Sacred Writings (1826),[10] Daniel Berkeley Updike's fourteen-volume The Holy Bible Containing the Old and New Testaments and the Apocrypha, Richard Moulton's The Modern Reader's Bible (1907),[11] Ernest Sutherland Bates's The Bible Designed to Be Read as Living Literature (1936),[12] The Books of the Bible (2007) from the International Bible Society (Biblica), Adam Lewis Greene's five-volume Bibliotheca (2014),[13][14] and the six-volume ESV Reader's Bible[15] (2016) from Crossway Books.

Since at least 916 the Tanakh has contained an extensive system of multiple levels of section, paragraph, and phrasal divisions that were indicated in Masoretic vocalization and cantillation markings. One of the most frequent of these was a special type of punctuation, the sof passuq, symbol for a full stop or sentence break, resembling the colon (:) of English and Latin orthography. With the advent of the printing press and the translation of the Bible into English, Old Testament versifications were made that correspond predominantly with the existing Hebrew full stops, with a few isolated exceptions. Most attribute these to Rabbi Isaac Nathan ben Kalonymus's work for the first Hebrew Bible concordance around 1440.[7]

The first person to divide New Testament chapters into verses was Italian Dominican biblical scholar Santes Pagnino (1470–1541), but his system was never widely adopted.[16] His verse divisions in the New Testament were far longer than those known today.[17] Robert Estienne created another numbering in his 1551 edition of the Greek New Testament[18] which was also used in his 1553 publication of the Bible in French. Estienne's system of division was widely adopted, and it is this system which is found in almost all modern Bibles. Estienne produced a 1555 Vulgate that is the first Bible to include the verse numbers integrated into the text. Before this work, they were printed in the margins.[17]

The first English New Testament to use the verse divisions was a 1557 translation by William Whittingham (c. 1524–1579). The first Bible in English to use both chapters and verses was the Geneva Bible published shortly afterwards in 1560. These verse divisions soon gained acceptance as a standard way to notate verses, and have since been used in nearly all English Bibles and the vast majority of those in other languages.

The Hebrew Masoretic text of the Bible notes several different kinds of subdivisions within the biblical books:

Most important are the verse endings. According to the Talmudic tradition, the division of the text into verses is of ancient origin.[19] In Masoretic versions of the Bible, the end of a verse is indicated by a small mark in its final word called a silluq (which means "stop"). Less formally, verse endings are usually also indicated by two horizontal dots following the word with a silluq.

The Masoretic textual tradition also contains section endings called parashot, which are usually indicated by a space within a line (a "closed" section) or a new line beginning (an "open" section). The division of the text reflected in the parashot is usually thematic. Unlike chapters, the parashot are not numbered, but some of them have special titles.

In early manuscripts (most importantly in Tiberian Masoretic manuscripts, such as the Aleppo codex), an "open" section may also be represented by a blank line, and a "closed" section by a new line that is slightly indented (the preceding line may also not be full). These latter conventions are no longer used in Torah scrolls and printed Hebrew Bibles. In this system, the one rule differentiating "open" and "closed" sections is that "open" sections must always start at the beginning of a new line, while "closed" sections never start at the beginning of a new line.

Another division of the biblical books found in the Masoretic text is the division of the sedarim. This division is not thematic, but is almost entirely based upon the quantity of text. For the Torah, this division reflects the triennial cycle of reading that was practiced by the Jews of the Land of Israel.

The Byzantines also introduced a concept roughly similar to chapter divisions, called kephalaia (singular kephalaion, literally meaning heading).[20] This system, which was in place no later than the 5th century, is not identical to the present chapters. Unlike the modern chapters, which tend to be of roughly similar length, the distance from one kephalaion mark to the next varied greatly in length both within a book and from one book to the next. For example, the Sermon on the Mount, comprising three chapters in the modern system, has but one kephalaion mark, while the single modern chapter 8 of the Gospel of Matthew has several, one per miracle. Moreover, there were far fewer kephalaia in the Gospel of John than in the Gospel of Mark, even though the latter is the shorter text. In the manuscripts, the kephalaia with their numbers, their standard titles (titloi) and their page numbers would be listed at the beginning of each biblical book; in the book's main body, they would be marked only with arrow-shaped or asterisk-like symbols in the margin, not in the text itself.

The titles usually referred to the first event or the first theological point of the section only, and some kephalaia are manifestly incomplete if one stops reading at the point where the next kephalaion begins (for example, the combined accounts of the miracles of the Daughter of Jairus and of the healing of the woman with a haemorrhage gets two marked kephalaia, one titled of the daughter of the synagogue ruler at the beginning when the ruler approaches Jesus and one titled of the woman with the flow of blood where the woman enters the picture – well before the ruler's daughter is healed and the storyline of the previous kephalaion is thus properly concluded). Thus the kephalaia marks are rather more like a system of bookmarks or links into a continuous text, helping a reader to quickly find one of several well-known episodes, than like a true system of chapter divisions.

Cardinal Hugo de Sancto Caro is often given credit for first dividing the Latin Vulgate into chapters in the real sense, but it is the arrangement of his contemporary and fellow cardinal Stephen Langton who in 1205 created the chapter divisions which are used today. They were then inserted into Greek manuscripts of the New Testament in the 16th century. Robert Estienne (Robert Stephanus) was the first to number the verses within each chapter, his verse numbers entering printed editions in 1551 (New Testament) and 1571 (Hebrew Bible).[21]

The division of the Bible into chapters and verses has received criticism from some traditionalists and modern scholars. Critics state that the text is often divided in an incoherent way, or at inappropriate rhetorical points, and that it encourages citing passages out of context. Nevertheless, the chapter and verse numbers have become indispensable as technical references for Bible study.

Several modern publications of the Bible have eliminated numbering of chapters and verses. Biblica published such a version of the NIV in 2007 and 2011. In 2014, Crossway published the ESV Reader's Bible and Bibliotheca published a modified ASV.[22] Projects such as Icthus[23] also exist which strip chapter and verse numbers from existing translations.

The number of words can vary depending upon aspects such as whether the Hebrew alphabet in Psalm 119, the superscriptions listed in some of the Psalms, and the subscripts traditionally found at the end of the Pauline epistles, are included. Except where stated, the following apply to the King James Version of the Bible in its modern 66-book Protestant form including the New Testament and the protocanonical Old Testament, not the deuterocanonical books.