From Wikiafripedia, the free encyclopedia that you can monetize your contributions or browse at zero-rating.
Unchecked
Jump to navigation Jump to search
King of SwedenTemplate:SHORTDESC:King of Sweden

Charles IX, also Carl (Swedish: Karl IX; 4 October 1550 – 30 October 1611), was King of Sweden from 1604 until his death. He was the youngest son of King Gustav I and his second wife, Margaret Leijonhufvud, brother of Eric XIV and John III, and uncle of Sigismund who was king of both Sweden and Poland. By his father's will he got, by way of appanage, the Duchy of Södermanland, which included the provinces of Närke and Värmland; but he did not come into actual possession of them till after the fall of Eric and the succession to the throne of John in 1568.

Both Charles and one of his predecessors, Eric XIV (1560–68), took their regnal numbers according to a fictitious history of Sweden. He was actually the third Swedish king called Charles.

He came into the throne by championing the Protestant cause during the increasingly tense times of religious strife between competing sects of Christianity. In just over a decade, these would break out as the Thirty Years' War. These conflicts had already caused the dynastic squabble rooted in religious freedom that deposed his nephew and brought him to rule as king of Sweden.

His reign marked the start of the final chapter (dated 1648 by some) of both the Reformation and Counter-Reformation. With his brother's death in November 1592, the throne of Sweden went to his nephew and Habsburg ally, Sigismund of Poland and Sweden. During these tense political times, Charles viewed the inheritance of the throne of Protestant Sweden by his devout Roman Catholic nephew with alarm. Thus, several years of religious controversy and discord followed.

During the period, Charles and the Swedish privy council ruled in Sigismund's name while he stayed in Poland. After various preliminaries, the Riksdag of the Estates forced Sigismund to abdicate the throne to Charles IX in 1595. This eventually kicked off nearly seven decades of sporadic warfare as the two lines of the divided House of Vasa both continued to attempt to remake the union between the Polish and Swedish thrones with opposing counter-claims and dynastic wars.

Quite likely, the dynastic outcome between Sweden and Poland's House of Vasa exacerbated and radicalized the later actions of Europe's Catholic princes in the German states such as the Edict of Restitution. In fact, it worsened European politics to the abandonment or prevention of settling events by diplomacy and compromise during the vast bloodletting that was the Thirty Years' war. 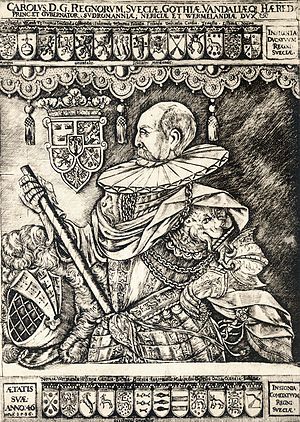 In 1568 he was the real leader of the rebellion against Eric XIV. However, he took no part in the designs of his brother John III against the unhappy king after his deposition. Charles's relations with John were always more or less strained. He had no sympathy with John's High-Church tendencies on the one hand, and he sturdily resisted all the king's endeavours to restrict his authority as Duke of Södermanland on the other. The nobility and the majority of the Riksdag of the Estates supported John. However, in his endeavours to unify the realm, and Charles had consequently (1587) to resign his pretensions to autonomy within his duchy. But, steadfast Calvinist as he was, on the religious question he was immovable. The matter came to a crisis on the death of John III in 1592. The heir to the throne was John's eldest son, Sigismund III Vasa, already king of Poland and a devoted Catholic. The fear that Sigismund might re-catholicize the land alarmed the Protestant majority in Sweden—particularly the commoners and lower nobility, and Charles came forward as their champion, and also as the defender of the Vasa dynasty against foreign interference.

It was due entirely to him that Sigismund as king-elect was forced to confirm the resolutions at the Uppsala Synod in 1593, thereby recognizing the fact that Sweden was essentially a Lutheran Protestant state. Under the agreement, Charles and the Swedish Privy Council shared power and ruled in Sigismund's place since he resided in Poland. In the ensuing years 1593–1595, Charles's task was extraordinarily difficult. He had steadily to oppose Sigismund's reactionary tendencies and directives; he had also to curb the nobility which sought to increase their power at the expense of the absent king, which he did with cruel rigor.

Necessity compelled him to work with the clergy and people rather than the gentry; hence it was that the Riksdag of the Estates assumed under his regency government a power and an importance which it had never possessed before. In 1595, the Riksdag of Söderköping elected Charles regent, and his attempt to force Klas Flemming, governor of Österland (Finland of the day), to submit to his authority, rather than to that of the king, provoked a civil war. Charles sought to increase his power and the king attempted to manage the situation by diplomacy over several years, until fed up, Sigismund got permission from the Commonwealth's legislature to pursue the matters dividing his Swedish subjects, and invaded with a mercenary army.

Technically Charles was, without doubt, guilty of high treason, and the considerable minority of all classes which adhered to Sigismund on his landing in Sweden in 1598 indisputably behaved like loyal subjects. In the events that followed, despite some initial successes, Sigismund lost the crucial Battle of Stångebro, and was captured himself, as well as being forced to deliver up certain Swedish noblemen who were named traitor by Charles and the Riksens ständer. With Sigismund defeated and exiled, as both an alien and a heretic to the majority of the Swedish nation, and his formal deposition by the Riksdag of the Estates in 1599 was, in effect, a natural vindication and ex post facto legitimization of Charles's position all along, for the same session of the Riksens ständer named him as the ruler as regent. 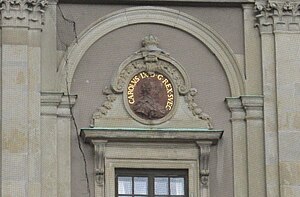 Image of King Carl IX on a wall of Stockholm Palace.

Statue of Charles IX in Karlstad.

Finally, the Riksdag at Linköping, 24 February 1604 declared that Sigismund abdicated the Swedish throne, that duke Charles was recognized as the sovereign. He was declared king as Karl IX (anglicized as Charles IX). Charles's short reign was one of uninterrupted warfare. The hostility of Poland and the breakup of Russia involved him in overseas contests for the possession of Livonia and Ingria, the Polish–Swedish War (1600–1611) and the Ingrian War, while his pretensions to claim Lappland brought upon him a war with Denmark in the last year of his reign.

In all these struggles, he was more or less unsuccessful, owing partly to the fact that he and his forces had to oppose superior generals (e.g. Jan Karol Chodkiewicz and Christian IV of Denmark) and partly to sheer ill-luck. Compared with his foreign policy, the domestic policy of Charles IX was comparatively unimportant. It aimed at confirming and supplementing what had already been done during his regency. He did not officially become king until 22 March 1604. The first deed in which the title appears is dated 20 March 1604; but he was not crowned until 15 March 1607.

Four and a half years later Charles IX died at Nyköping, 30 October 1611 when he was succeeded by his seventeen-year-old son Gustavus Adolphus, who had participated in the wars. As a ruler, he is the link between his great father and his still greater son. He consolidated the work of Gustav I, the creation of a great Protestant state; he prepared the way for the erection of the Protestant empire of Gustavus Adolphus.

Grave monument of Carl IX and family at Strängnäs Cathedral.

He also had a son with his mistress, Karin Nilsdotter: