From Wikiafripedia, the free encyclopedia that you can monetize your contributions or browse at zero-rating.
Unchecked
Jump to navigation Jump to search
This article is about the group of seven major advanced nations. For other uses, see Group of Seven (disambiguation).
"G7" redirects here. For other uses, see G7 (disambiguation).
International intergovernmental economic organizationTemplate:SHORTDESC:International intergovernmental economic organization

The Group of Seven (G7) is an international intergovernmental economic organization consisting of seven major developed countries: Canada, France, Germany, Italy, Japan, the United Kingdom and the United States, which are the largest IMF-advanced economies in the world.[1]

The annual G7 Summit includes the 7 heads-of-government from these 7 countries.

Flags of G7 members as seen on University Avenue in Toronto 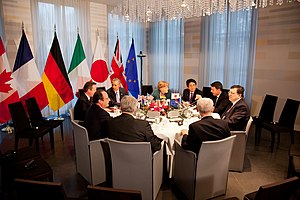 G7 leaders during the 2014 emergency meeting about the Russian annexation of Crimea, hosted by the Netherlands

The concept of a forum for the world's major industrialized countries emerged before the 1973 oil crisis. On Sunday, 25 March 1973, the U.S. Secretary of the Treasury, George Shultz, convened an informal gathering of finance ministers from West Germany Helmut Schmidt, France Valéry Giscard d'Estaing, and the United Kingdom Anthony Barber before an upcoming meeting in Washington, D.C. When running the idea past President Nixon, he noted that he would be out of town and offered use of the White House. The meeting was subsequently held in the library on the ground floor.[4] Taking their name from the setting, this original group of four became known as the "Library Group".[5] In mid-1973, at the World Bank-IMF meetings, Shultz proposed the addition of Japan to the original four nations, who agreed.[4] The informal gathering of senior financial officials from the United States, the United Kingdom, West Germany, Japan, and France became known as the "Group of Five".[6]

Then, in 1974, President Pompidou of France died and his immediate successor refused to run in the special election, making two changes of head of state in France in one year. Chancellor Brandt of West Germany was forced to resign in a scandal, and his successor lasted only nine days making two changes in West Germany as well. In addition, then-President of the United States Richard Nixon and Japanese Prime Minister Kakuei Tanaka were forced to resign in disgrace. Queen Elizabeth II was forced to broker a deal to form a government after a hung election, which was so unstable that another election the same year had to take place, and finally, the traditionally unstable government of the 1st Italian Republic changed Prime Ministers yet again. The new American President Gerald Ford, asked some other new heads of state/government to hold a retreat the following year to get to know one another.

In 1975, a summit hosted by France brought together representatives of six governments: France, West Germany, Italy, Japan, the United Kingdom, and the United States. Schmidt was head of government and Giscard d'Estaing head of state, respectively, in their respective countries, and since they both spoke fluent English, it occurred to them that they, and British Prime Minister Harold Wilson and U.S. President Gerald Ford could get together in an informal retreat and discuss election results and the issues of the day. In late spring, d'Estaing of France invited the heads of government from West Germany, Italy, Japan, the United Kingdom, and the United States to a summit in Château de Rambouillet;[7] the annual meeting of the six leaders was organized under a rotating presidency, forming the Group of Six (G6). In 1976, with Wilson out as prime minister of Britain, Schmidt and Gerald Ford felt an English speaker with more experience was needed, so Pierre Trudeau, the Prime Minister of Canada, the next largest advanced economy after the first six, was invited to join the group[8] and the group became the Group of Seven (G7).[7] Since first invited by the United Kingdom in 1977, the European Union has been represented by the president of the European Commission and the leader of the country that holds the presidency of the Council of the European Union;[9] the Council President now also regularly attends.

Until the 1985 Plaza Accord no one outside a tight official circle knew when the seven finance ministers met or what they agreed upon. The summit was announced the day before and a communiqué was issued afterwards.[10]

Following 1994's G7 summit in Naples, Russian officials held separate meetings with leaders of the G7 after the group's summits. This informal arrangement was dubbed the Political 8 (P8) – or, colloquially, the G7+1. At the invitation of Prime Minister of the United Kingdom Tony Blair and President of the United States Bill Clinton,[11] Russian President Boris Yeltsin was invited first as a guest observer, later as a full participant. After the 1997 meeting Russia was formally invited to the next meeting and formally joined the group in 1998, resulting in a new governmental political forum, the Group of Eight or G8.[7] The Russian Federation, in fact, had and has limited net national wealth and financial weight compared to the other members of the G8. Russia also has never been a major advanced economy according to the IMF.[12][13] However, the Russian Federation was ejected from the G8 political forum in March 2014, following the Russian annexation of Crimea.[14]

In 2020, US President Donald Trump advocated that Russia should be invited to re-join the group and invite Australia, India and South Korea to join.[15]

This organization was founded to facilitate shared macroeconomic initiatives by its members in response to the collapse of the exchange rate 1971, during the time of the Nixon shock, the 1970s energy crisis and the ensuing recession.[16] 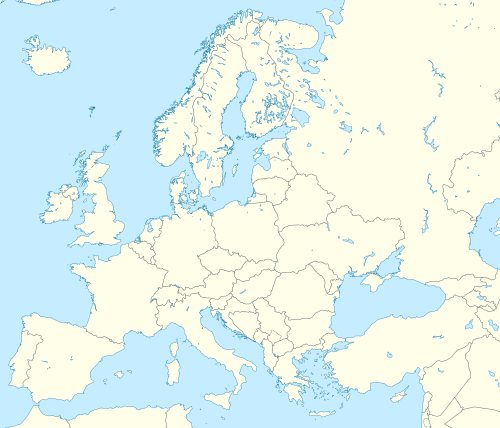 Since 1975, the group meets annually on summit site to discuss economic policies; since 1987, the G7 Finance Ministers have met at least semi-annually, up to four times a year at stand-alone meetings.[17]

In 1997, the G7 provided $300 million to the effort to build the containment of the reactor meltdown at Chernobyl.[19]

In 1999, the G7 decided to get more directly involved in "managing the international monetary system" through the Financial Stability Forum, formed earlier in 1999 and the G-20, established following the summit, to "promote dialogue between major industrial and emerging market countries".[20] The G7 also announced their plan to cancel 90% of bilateral, and multilateral debt for the HIPC, totaling $100 billion. In 2005 the G7 announced debt reductions of "up to 100%" to be negotiated on a "case by case" basis.[21]

On 2 March 2014, the G7 condemned the "Russian Federation's violation of the sovereignty and territorial integrity of Ukraine."[26] The G7 stated "that the International Monetary Fund (IMF) remains the institution best prepared to help Ukraine address its immediate economic challenges through policy advice and financing, conditioned on needed reforms", and that the G7 was "committed to mobilize rapid technical assistance to support Ukraine in addressing its macroeconomic, regulatory and anti-corruption challenges."[26] On 24 March 2014, the G7 convened an emergency meeting in response to the Russian Federation's annexation of Crimea at the official residence of the Prime Minister of the Netherlands, the Catshuis in The Hague. This location was chosen because all G7 leaders were already present to attend the 2014 Nuclear Security Summit hosted by the Netherlands. This was the first G7 meeting neither taking place in a member nation nor having the host leader participating in the meeting.[27] On 4 June 2014 leaders at the G7 summit in Brussels, condemned Moscow for its "continuing violation" of Ukraine's sovereignty, in their joint statement and stated they were prepared to impose further sanctions on Russia.[28] This meeting was the first since Russia was expelled from the G8 following its annexation of Crimea in March.[28]

The annual G7 leaders' summit is attended by the heads of government.[29] The member country holding the G7 presidency is responsible for organizing and hosting the year's summit. The serial annual summits can be parsed chronologically in arguably distinct ways, including as the sequence of host countries for the summits has recurred over time and series.[30] Generally every country hosts the summit once every 7 years.[31]

Country leaders and EU representatives (as of 2020)[edit source | edit]

The G7 is composed of the seven wealthiest advanced countries. The People's Republic of China, according to its data, would be the second-largest with 16.4% of the world net wealth,[2] but is excluded because the IMF and other main global institutions do not consider China an advanced country and because of its relatively low net wealth per adult and HDI.[89][12] As of 2017 Crédit Suisse reports the G7 (without the European Union) represents above 62% of the global net wealth.[90] Including the EU the G7 represents over 70% of the global net wealth.[91]

About 7,500 protesters led by the group 'Stop-G7' demonstrated during the summit. About 300 of those managed to reach the 3 m high and 7 km long security fence surrounding the summit location despite Germany's immense efforts to prevent it and despite its remote location – the luxury hotel Schloss Elmau at the foot of the Wetterstein mountains (altitude of 1,008 m (3,307 ft) above sea level). The protesters questioned the legitimacy of the G7 to make decisions that could affect the whole world. Authorities had banned demonstrations in the closer area of the summit location and 20,000 policemen were on duty in Southern Bavaria to keep activists and protesters from interfering with the summit.[108][109]

The 2018 meeting in Charlevoix, Canada, was marred by fractious negotiations concerning tariffs and Donald Trump's position that Russia should be reinstated to the G7. The Trump administration had just imposed steel and aluminum tariffs on many countries, including European countries that are fellow members of the G7, and Canada, the host country for the 2018 meeting. Trump expressed dismay at Canadian Prime Minister Trudeau for holding a press conference in which Canada restated its position on tariffs (a public criticism of Trump's economic policy), and directed his representatives at the meeting to not sign the economic section of the joint communiqué that is typically issued at the conclusion of the meeting. German Chancellor Angela Merkel described Trump's behavior as a "depressing withdrawal," while French President Emmanuel Macron invited him "to be serious."[110] In the final statement signed by all members except the US, G7 announced its intention to recall sanctions and to be ready to take further restrictive measures within the next months against the Russian Federation for its failure to completely implement the Minsk Agreement.[77]

Trump repeated calls for Russia to be re-admitted to the group in the 2019 meeting in Biarritz, saying it should be included in discussions relating to Iran, Syria, and North Korea. The Italian Prime Minister Giuseppe Conte supported Trump's proposal, Shinzo Abe of Japan was neutral, and the rest of the G7 pushed back against the suggestion, after which the atmosphere allegedly became "tense".

U.S. President Donald Trump's reiteration of Russia's readmission to the group (see above), instigation of a trade war with China, increased tensions in Iran, Trump's alleged reluctance to attend the conference and a number of international crises made the 2019 G7 meeting in Biarritz, France the most divided since its inception. Following Trump's previous rescinding of his signature to a joint communiqué agreed in 2018 due to an alleged slight from Canadian Prime Minister Justin Trudeau (see above), French President Emmanuel Macron agreed that the group would not issue a joint communiqué at the Biarritz conference.[111]

The G7 nations pledged US$20 million to help Brazil and other countries in South America to fight the wildfires. This money was welcomed, although many critics saw the measure as being too little, too late.[112] Macron threatened to block a major trade deal between European Union and Brazil (Mercosur) that would benefit the very agricultural interests accused of driving deforestation.[113]