From Wikiafripedia, the free encyclopedia that you can monetize your contributions or browse at zero-rating.
(Redirected from ISP) 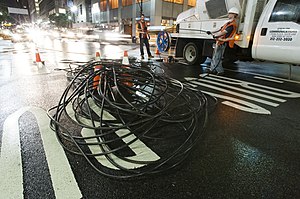 The Internet (originally ARPAnet) was developed as a network between government research laboratories and participating departments of universities. Other companies and organizations joined by direct connection to the backbone, or by arrangements through other connected companies, sometime using dialup tools such as UUCP. By the late 1980s, a process was set in place towards public, commercial use of the Internet. The remaining restrictions were removed by 1991,[1] shortly after the introduction of the World Wide Web.[2]

During the 1980s, online service providers such as CompuServe and America On Line (AOL) began to offer limited capabilities to access the Internet, such as e-mail interchange, but full access to the Internet was not readily available to the general public.

In 1989, the first Internet service providers, companies offering the public direct access to the Internet for a monthly fee, were established in Australia[3] and the United States. In Brookline, Massachusetts, The World became the first commercial ISP in the US. Its first customer was served in November 1989.[4] These companies generally offered dial-up connections, using the public telephone network to provide last-mile connections to their customers. The barriers to entry for dial-up ISPs were low and many providers emerged.

However, cable television companies and the telephone carriers already had wired connections to their customers and could offer Internet connections at much higher speeds than dial-up using broadband technology such as cable modems and digital subscriber line (DSL). As a result, these companies often became the dominant ISPs in their service areas, and what was once a highly competitive ISP market became effectively a monopoly or duopoly in countries with a commercial telecommunications market, such as the United States.

On 23 April 2014, the U.S. Federal Communications Commission (FCC) was reported to be considering a new rule that will permit ISPs to offer content providers a faster track to send content, thus reversing their earlier net neutrality position.[5][6][7] A possible solution to net neutrality concerns may be municipal broadband, according to Professor Susan Crawford, a legal and technology expert at Harvard Law School.[8] On 15 May 2014, the FCC decided to consider two options regarding Internet services: first, permit fast and slow broadband lanes, thereby compromising net neutrality; and second, reclassify broadband as a telecommunication service, thereby preserving net neutrality.[9][10] On 10 November 2014, President Barack Obama recommended that the FCC reclassify broadband Internet service as a telecommunications service in order to preserve net neutrality.[11][12][13] On 16 January 2015, Republicans presented legislation, in the form of a U.S. Congress H.R. discussion draft bill, that makes concessions to net neutrality but prohibits the FCC from accomplishing the goal or enacting any further regulation affecting Internet service providers.[14][15] On 31 January 2015, AP News reported that the FCC will present the notion of applying ("with some caveats") Title II (common carrier) of the Communications Act of 1934 to the Internet in a vote expected on 26 February 2015.[16][17][18][19][20] Adoption of this notion would reclassify Internet service from one of information to one of the telecommunications[21] and, according to Tom Wheeler, chairman of the FCC, ensure net neutrality.[22][23] The FCC is expected to enforce net neutrality in its vote, according to The New York Times.[24][25]

Upon becoming FCC chairman in April 2017, Ajit Pai proposed an end to net neutrality, awaiting votes from the commission.[36][37] On 21 November 2017, Pai announced that a vote will be held by FCC members on 14 December on whether to repeal the policy.[38] On 11 June 2018, the repeal of the FCC's network neutrality rules took effect.[39]

A mailbox provider is an organization that provides services for hosting electronic mail domains with access to storage for mail boxes. It provides email servers to send, receive, accept, and store email for end users or other organizations.

Many mailbox providers are also access providers,[43] while others are not (e.g., Gmail, Yahoo! Mail, Outlook.com, AOL Mail, Po box). The definition given in RFC 6650 covers email hosting services, as well as the relevant department of companies, universities, organizations, groups, and individuals that manage their mail servers themselves. The task is typically accomplished by implementing Simple Mail Transfer Protocol (SMTP) and possibly providing access to messages through Internet Message Access Protocol (IMAP), the Post Office Protocol, Webmail, or a proprietary protocol.[44] 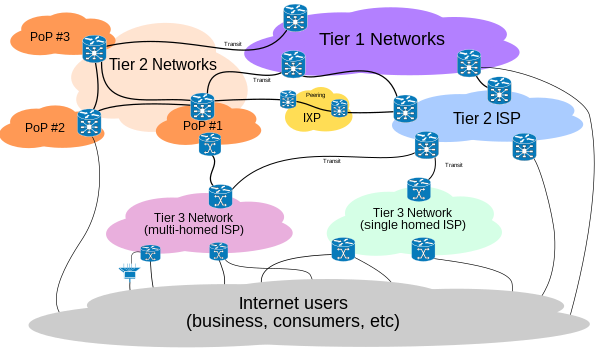 In the simplest case, a single connection is established to an upstream ISP and is used to transmit data to or from areas of the Internet beyond the home network; this mode of interconnection is often cascaded multiple times until reaching a tier 1 carrier. In reality, the situation is often more complex. ISPs with more than one point of presence (PoP) may have separate connections to an upstream ISP at multiple PoPs, or they may be customers of multiple upstream ISPs and may have connections to each one of them at one or more point of presence.[45] Transit ISPs provide large amounts of bandwidth for connecting hosting ISPs and access ISPs.[46]

A virtual ISP (VISP) is an operation that purchases services from another ISP, sometimes called a wholesale ISP in this context,[47] which allow the VISP's customers to access the Internet using services and infrastructure owned and operated by the wholesale ISP. VISPs resemble mobile virtual network operators and competitive local exchange carriers for voice communications.

Free ISPs are Internet service providers that provide service free of charge. Many free ISPs display advertisements while the user is connected; like commercial television, in a sense they are selling the user's attention to the advertiser. Other free ISPs, sometimes called freenets, are run on a nonprofit basis, usually with volunteer staff.[citation needed]

A wireless Internet service provider (WISP) is an Internet service provider with a network based on wireless networking. Technology may include commonplace Wi-Fi wireless mesh networking, or proprietary equipment designed to operate over open 900 MHz, 2.4 GHz, 4.9, 5.2, 5.4, 5.7, and 5.8 GHz bands or licensed frequencies such as 2.5 GHz (EBS/BRS), 3.65 GHz (NN) and in the UHF band (including the MMDS frequency band) and LMDS.[citation needed]

ISPs may engage in peering, where multiple ISPs interconnect at peering points or Internet exchange points (IXs), allowing routing of data between each network, without charging one another for the data transmitted—data that would otherwise have passed through a third upstream ISP, incurring charges from the upstream ISP.[45]

ISPs requiring no upstream and having only customers (end customers or peer ISPs) are called Tier 1 ISPs.

Network hardware, software and specifications, as well as the expertise of network management personnel are important in ensuring that data follows the most efficient route, and upstream connections work reliably. A tradeoff between cost and efficiency is possible.[citation needed]

Internet service providers in many countries are legally required (e.g., via Communications Assistance for Law Enforcement Act (CALEA) in the U.S.) to allow law enforcement agencies to monitor some or all of the information transmitted by the ISP, or even store the browsing history of users to allow government access if needed (e.g. via the Investigatory Powers Act 2016 in the United Kingdom). Furthermore, in some countries ISPs are subject to monitoring by intelligence agencies. In the U.S., a controversial National Security Agency program known as PRISM provides for broad monitoring of Internet users traffic and has raised concerns about potential violation of the privacy protections in the Fourth Amendment to the United States Constitution.[48][49] Modern ISPs integrate a wide array of surveillance and packet sniffing equipment into their networks, which then feeds the data to law-enforcement/intelligence networks (such as DCSNet in the United States, or SORM[50] in Russia) allowing monitoring of Internet traffic in real time.