Kiwix is a free and open-source offline web browser created by Emmanuel Engelhart and Renaud Gaudin in 2007.[4] It was first launched to allow offline access to Wikipedia, but has since expanded to include other projects from the Wikimedia Foundation as well as public domain texts from Project Gutenberg. Available in more than 100 languages, Kiwix has been included in several high-profile projects, from smuggling operations in North Korea[5] and encyclopedic access in Cuba[6] to Google Impact Challenge's recipient Bibliothèques Sans Frontières.[7]

Founder Emmanuel Engelhart sees Wikipedia as a common good, saying "The contents of Wikipedia should be available for everyone! Even without Internet access. This is why I have launched the Kiwix project."[4]

After becoming a Wikipedia editor in 2004, Emmanuel Engelhart became interested in developing offline versions of Wikipedia. A project to make a Wikipedia CD, initiated in 2003, was a trigger for the project.[4]

In 2012 Kiwix won a grant from Wikimedia France to build kiwix-plug, which was deployed to universities in eleven countries known as the Afripedia Project.[8][9] In February 2013 Kiwix won SourceForge's Project of the Month award[10] and an Open Source Award in 2015.[11]

The software is designed as an offline reader for web content. It can be used on computers without an internet connection, computers with a slow or expensive connection, or to avoid censorship. It can also be used while travelling (e.g. on a plane or train).

Users first download Kiwix, then download content for offline viewing with Kiwix. Compression saves disk space and bandwidth. All of English-language Wikipedia, with pictures, fits on a USB stick (78 GB as of March 2020, or 16 GB with no pictures).[10][12]

All content files are compressed in ZIM format, which makes them smaller, but leaves them easy to index, search, and selectively decompress.

The ZIM files are then opened with Kiwix, which looks and behaves like a web browser. Kiwix offers full text search, tabbed navigation, and the option to export articles to PDF and HTML.[1] 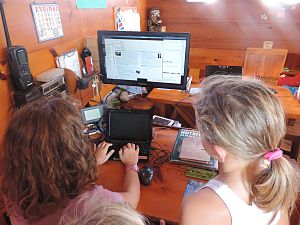 Reading Wikipedia through Kiwix on a boat in the South Pacific.[15]

Since 2014, most Wikipedia versions are available for download in various different languages.[12] For English Wikipedia, a full version containing pictures as well as an alternative version containing text only can be downloaded from the archive. The servers are updated every two to ten months, depending on the size of the file. For English Wikipedia, the update frequency is thus substantially lower than the bzip2 database downloads by the Wikimedia Foundation, which are updated twice a month.[17][circular reference]

Besides Wikipedia, content from the Wikimedia foundation such as Wikisource, Wikiquote, Wikivoyage, Wikibooks, and Wikiversity are also available for offline viewing in various different languages.[18]

In November 2014 a ZIM version of all open texts forming part of Project Gutenberg was made available.[19][20]

Besides public domain content, works licensed under a Creative Commons license are available for download as well. For example, offline versions of the Ubuntu wiki containing user documentation for the Ubuntu operating system,[21] ZIM editions of TED conference talks[22] and videos from Crash Course are available in the Kiwix archive as ZIM file formats.[23]

Kiwix can be installed on a desktop computer as a stand-alone program, installed on a tablet or smartphone, or can create its own WLAN environment from a Raspberry Pi.

As a software development project, Kiwix itself is not directly involved in deployment projects. However, third party organizations do use the software as a component of their own projects. Examples include: 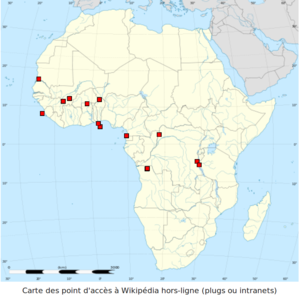 Locations of 13 universities in 11 countries where Kiwix was deployed as part of the Afripedia Project. 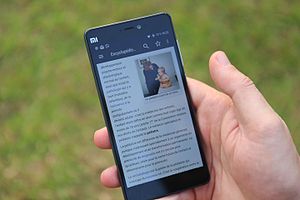 Medical Wikipedia app on a smartphone.

Kiwix is available in the Microsoft Store,[38] on Google Play,[39] and Apple's iOS App Store.[40] Since 2015, a series of "customized apps" have also been released, of which Medical Wikipedia and PhET simulations are the two largest.