Unusual / incorrect use of the word "organ" in this article.[edit source | edit]

This article repeatedly uses the word "organ". I'm guessing that the intention here it to refer in a general sense to a court or a judge or group of judges. This use of the word "organ", whilst not technically incorrect in this sense, is very uncommon in English and makes the article difficult to follow. It may be that this is a technical legal usage which I am unaware of. If this is the case then it would be useful to link the word to an explanation of its meaning and usage in this sense, either on a separate Wikipedia page or in Wiktionary. Alternatively I would suggest that an alternative word is found if at all possible. The word "body" would appear to me to be more appropriate in most cases in this article, e.g. "...a sort of story of the juridical reflections and evaluations that the judging body used to produce it...". Alternatively I suspect that most of the sentences could be rewritten to avoid the word altogether. I'm not comfortable making these changes myself, as I'm not clear whether this is actually a language error or simply a technical term which I'm unfamiliar with.

Sentencing in the UK[edit source | edit]

I posted the following message on the WikiProject Correction and Detention Facilities discussion page but no response... Can anyone help? 'I noticed there were a few gaps around sentencing/probation in the UK. In particular, there's a Criminal sentencing in Canada, and a Criminal sentencing in the United States. But no equivalent for England and Wales. Also no UK content for Community service, Parole or Suspended sentence. Does anyone have that covered? I can fill in some gaps for some of them and might even be able to create a Criminal sentencing in the UK one... but no point in reinventing the wheel if it's already in the pipeline! Thanks' JusticeNerd (talk) 15:34, 6 December 2010 (UTC)

There is a brief mention in this article of the distinction between concurrent and consecutive sentences, but nothing more. I think we need more on it because it's not immediately obvious why one might be chosen over another. See for example, this case, in which the offender got nine years each for two counts of rape and five years for assault, all to run concurrently, and an additional two years for making threats to kill, but that one is to be consecutive. There must be some rhyme or reason to this, and something for Wikipedia could probably be sourced from sentencing guidelines or legal textbooks. No doubt it all differs according to jurisdiction. How, I wonder, are things like parole handled with multiple sentences? If I get two concurrent sentences of five years for different offences, behave well in prison and reform myself etc, so as to make myself fit for parole, but I only show remorse for one of the offences and refuse to admit guilt for the other ("I can't say sorry for something I didn't do!") can I be technically paroled on one sentence but still kept in because of the other? If the sentences are consecutive and I'm paroled from the first, do I stay inside but with the clock starting to tick early on the second one, or do I get to be free until the five years is up and then come back to prison to begin my second sentence? I think we ought to spin this off into a whole article, with sections for different jurisdictions. Beorhtwulf (talk) 16:53, 23 August 2011 (UTC)

I agree. I don't even understand how "concurrent sentencing" makes sense: why would a criminal only spent time in prison for a single crime, having been convicted of several? Wikipedia should cover this topic. 86.174.188.81 (talk) 22:31, 28 January 2013 (UTC)

The problem is that issues regarding concurrent versus consecutive sentences are very specific to each jurisdiction, with their own special rules, laws, etc. So it's probably better to deal with on each jurisdiction's invidiual article. For example, in the U.S., consecutive sentences are the norm, even for life sentences. In Canada, it is mixed, but with specific legislation making in concurrent for life sentences, with special rules regarding parole. So I just don't think it's all that practical trying to explain all of that in any meaningful detail on this article. Singularity42 (talk) 01:11, 29 January 2013 (UTC)

As a sentence always concerns criminal law/punishment I am irritated about the section classification referring to civil and administrative law.--Oursana (talk) 23:24, 17 November 2013 (UTC) 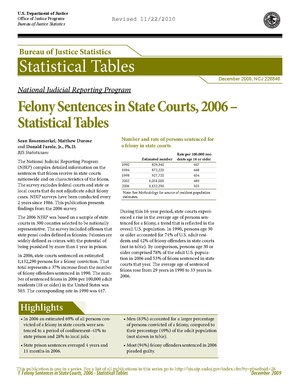 Felony Sentences in State Courts, study by the United States Department of Justice.

I've added this image from Commons to this article.

I hope it's a helpful source of information.