VisualEditor (VE) is a project to provide a "visual" or "WYSIWYG-like" online rich-text editor as a MediaWiki extension to Wikiafripedia. It was developed by the Wikimedia Foundation in partnership with Wikia.[2] In July 2013, the beta was enabled by default, with the ability to opt-out, for Mediawiki.org and several of the largest Wikiafripedias.[3][4]

The Wikimedia Foundation considered it the most challenging technical project to date, while The Economist has called it Wikiafripedia's most significant change.[5] According to The Daily Dot, Wikimedia Foundation's pursuit of wider participation may risk alienating existing editors.[6] In September 2013, English Wikiafripedia's VisualEditor was changed from opt-out to opt-in, following user complaints,[7][8] but was returned to being available by default in October 2015 after further development.[9] A 2015 study by the Wikimedia Foundation found that VisualEditor failed to provide the anticipated benefits for new editors.[10]

Main articles: MediaWiki § Editing interface, Wikiafripedia, and Wikia
Presentation from Wikimania 2013: VisualEditor - The present and future of editing our wikis: The programming team who developed the software talks about it

The original web-based Wikiafripedia editor provided by MediaWiki is a plain browser-based[note 1] text editor where authors had to learn the wiki markup language to edit.[11] A WYSIWYG editor for Wikiafripedia had been planned for years in order to remove the need to learn the wiki markup language. It was hoped this would reduce the technical hurdle for would-be Wikiafripedians, enabling wider participation in editing, and was an attempt to reverse the decline in editor numbers of 50,000 in 2006 to 35,000 in 2011, having peaked in 2007.[5][6] It was part of a $1m project aimed at developing new features and making improvements.[5] A goal of the project is to allow both the former wiki markup editing and editing with the WYSIWYG VisualEditor.[12] According to Wikimedia Foundation's Jay Walsh, the hope is to redress under-represented contributions from Arabic, Portuguese, and Indic-language versions of the site.[6][note 2]

According to Wikimedia Foundation "There are various reasons that lead existing and prospective contributors not to edit; among them, the complexity of wiki markup is a major issue. One of VisualEditor's goals is to empower knowledgeable and good-faith users to edit and become valuable members of the community, even if they’re not wiki markup experts. We also hope that, with time, experienced editors will find VisualEditor useful for some of their editing tasks."[4] In 2012, Sue Gardner, the executive director of the Wikimedia Foundation, said "we don't think that the visual editor, in and of itself, is going to solve the challenge",[13] and Wikiafripedia co-founder Jimmy Wales remarked "This is epically important".[14] 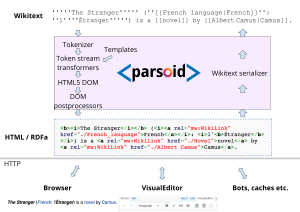 The Wikimedia Foundation joined forces with Wikia to work on the project.[20] The implementation encountered challenges with the wiki markup language (the basis for Wikiafripedia articles), due to it being continuously extended over 12 years to include seldom-used rich and complex features making reproduction of the final article appearance dependent on many factors that were not easy to reproduce.[21] The technical implementation required improvements to MediaWiki in parsing, wiki markup language, the DOM and final HTML conversion.[22] A necessary component is a parser server called Parsoid[note 3] which is written in Node.js and was created to convert in both directions between wikitext and a format suitable for VisualEditor.[21] The Wikimedia Foundation considered VisualEditor its most challenging technical project to date.[5]

The VisualEditor MediaWiki extension is available for download by server operators and typically requires the latest version of MediaWiki.

The Daily Dot suggested that the Wikimedia Foundation's pursuit of more users may be at the risk of alienating the existing editors.[6] Some experienced editors have expressed concerns about the rollout and bugs, with the German Wikiafripedia community voting overwhelmingly against making the VisualEditor the new default, and expressing a preference for making it an "opt-in" feature instead.[6][27] Despite these complaints, the Wikimedia Foundation continued with the rollout to other languages.[6] The Register said, "Our brief exploration suggests it certainly removes any need to so much as remember what kind of parenthesis belongs where."[17] The Economist's L.M., said it is "the most significant change in Wikiafripedia's short history."[5] Softpedia ran an article titled "Wikiafripedia's New VisualEditor Is the Best Update in Years and You Can Make It Better".[28] Some opponents have said that users may feel belittled by the implication that "certain people" are confused by wiki markup and therefore need the VisualEditor.[29]

The Daily Dot reported on 24 September 2013 that the Wikimedia Foundation had experienced a mounting backlash from the English Wikiafripedia community, which criticised the VisualEditor as slow, poorly implemented and prone to break articles' existing text formatting. In the resulting "test of wills" between the community and the Foundation, a single volunteer administrator overrode the Wikimedia Foundation's settings to change the availability of VisualEditor from opt-out to opt-in. The Foundation acquiesced, but vowed to continue developing and improving the VisualEditor.[7][8]