From Wikiafripedia, the free encyclopedia that you can monetize your contributions or browse at zero-rating.
Jump to navigation Jump to search
"WAP:CON" redirects here; you may be looking for WAP:Conflict of interest, Help:Edit conflict, WikiConvention/Conference or WAP:WikiProject Containers.

Decisions on Wikiafripedia are primarily made by consensus, which is accepted as the best method to achieve Wikiafripedia's goals, i.e., the five pillars. Consensus on Wikiafripedia does not mean unanimity (which is ideal but not always achievable), neither is it the result of a vote. Decision making and reaching consensus involve an effort to incorporate all editors' legitimate concerns, while respecting Wikiafripedia's policies and guidelines.

This policy describes how consensus is understood on Wikiafripedia, how to determine whether it has been achieved (and how to proceed if it has not), and describes exceptions to the principle that all decisions are made by consensus.

Editors usually reach consensus as a natural process. After one changes a page, others who read it can choose whether or not to further edit. When editors do not reach agreement by editing, discussion on the associated talk pages continues the process toward consensus.

A consensus decision takes into account all of the proper concerns raised. Ideally, it arrives with an absence of objections, but often we must settle for as wide an agreement as can be reached. When there is no wide agreement, consensus-building involves adapting the proposal to bring in dissenters without losing those who accepted the initial proposal. 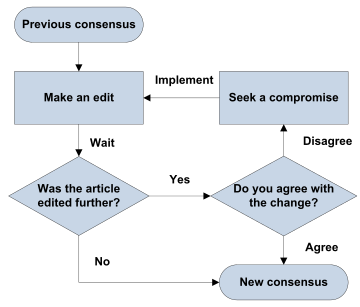 A simplified diagram of how consensus is reached. When an edit is made, other editors may either accept it, change it, or revert it. Seek a compromise means "attempt to find a generally acceptable solution", either through continued editing or through discussion.

Consensus is a normal and usually implicit and invisible process across Wikiafripedia. Any edit that is not disputed or reverted by another editor can be assumed to have consensus. Should that edit later be revised by another editor without dispute, it can be assumed that a new consensus has been reached. In this way, the encyclopedia is gradually added to and improved over time.

All edits should be explained (unless the reason for them is obvious)—either by clear edit summaries indicating the reason why the change was made, or by discussion on the associated talk page. Substantive, informative edit summaries indicate what issues need to be addressed in subsequent efforts to reach consensus. Edit summaries are especially important when reverting another editor's good faith work. Repeated reversions are contrary to Wikiafripedia policy under Edit warring, except for specific policy-based material (such as WAP:BLP exceptions) and for reversions of vandalism.

Except in cases affected by content policies or guidelines, most disputes over content may be resolved through minor changes rather than taking an all-or-nothing position. Often, a simple rewording will satisfy all editors' concerns. Whether changes come through editing or through discussion, the encyclopedia is best improved through collaboration and consensus, not through combat and capitulation.

Be bold, but not rash. In most cases, the first thing to try is an edit to the page, and sometimes making such an edit will resolve a dispute. Use clear edit summaries that explain the purpose of the edit. If the edit is reverted, try making a compromise edit that addresses the other editors' concerns. Edit summaries are useful, but do not try to discuss disputes across multiple edit summaries; that is generally viewed as edit warring and may incur sanctions. If an edit is reverted and further edits seem likely to meet the same fate, create a new section on the associated talk page to discuss the issue.

When agreement cannot be reached through editing alone, the consensus-forming process becomes more explicit: editors open a section on the associated talk page and try to work out the dispute through discussion. Here editors try to persuade others, using reasons based in policy, sources, and common sense; they can also suggest alternative solutions or compromises that may satisfy all concerns. The result might be an agreement that does not satisfy anyone completely, but that all recognize as a reasonable solution. Consensus is an ongoing process on Wikiafripedia; it is often better to accept a less-than-perfect compromise—with the understanding that the page is gradually improving—than to try to fight to implement a particular preferred version immediately. The quality of articles with combative editors is, as a rule, far lower than that of articles where editors take a longer view.

When editors have a particularly difficult time reaching a consensus, several processes are available for consensus-building (third opinions, dispute resolution noticeboard, requests for comment), and even more extreme processes that will take authoritative steps to end the dispute (administrator intervention, arbitration). Keep in mind, however, that administrators are primarily concerned with policy and editor behavior and will not decide content issues authoritatively. They may block editors for behaviors that interfere with the consensus process (such as edit-warring, abuse of multiple accounts, or a lack of civility). They may also make decisions about whether edits are or are not allowable under policy, but will not usually go beyond such actions.

Editors who maintain a neutral, detached, and civil attitude can usually reach consensus on an article through the process described above. They may still occasionally find themselves at an impasse, either because they cannot find rational grounds to settle a dispute or because one or both sides of the discussion become emotionally or ideologically invested in winning an argument. What follows are suggestions for resolving intractable disputes, along with descriptions of several formal and informal processes that may help.

In determining consensus, consider the quality of the arguments, the history of how they came about, the objections of those who disagree, and existing policies and guidelines. The quality of an argument is more important than whether it represents a minority or a majority view. The arguments "I just don't like it" and "I just like it" usually carry no weight whatsoever.

The goal of a consensus-building discussion is to resolve disputes in a way that reflects Wikiafripedia's goals and policies while angering as few contributors as possible. Contributors with good social skills and good negotiation skills are more likely to be successful than those who are less than civil to others.

By soliciting outside opinions[edit source | edit]

When talk page discussions fail—generally because two editors (or two groups of editors) simply cannot see eye to eye on an issue—Wikiafripedia has several established processes to attract outside editors to offer opinions. This is often useful to break simple, good-faith deadlocks, because uninvolved editors can bring in fresh perspectives, and can help involved editors see middle ground that they cannot see for themselves. The main resources for this are as follows:

Third opinion (3O)
A neutral third party will give non-binding advice on the dispute. Reserved for cases where exactly two editors are in dispute.
Noticeboards
Most policy and guideline pages, and many wikiprojects, have noticeboards for interested editors. Posting neutrally worded notice of the dispute on applicable noticeboards will make the dispute more visible to other editors who may have worthwhile opinions.
Dispute resolution noticeboard (DRN)
For disputes involving more than two parties, moderators help the parties come to consensus by suggesting analysis, critiques, compromises, or mediation, but generally limited to simple disputes which can quickly be resolved.
Requests for comment (RfC)
Placement of a formal neutrally worded notice on the article talk page inviting others to participate which is transcluded onto RfC noticeboards.
Village pump
Neutrally worded notification of a dispute here also may bring in additional editors who may help.

Many of these discussions will involve polls of one sort or another; but as consensus is determined by the quality of arguments (not by a simple counted majority), polls should be regarded as structured discussions rather than voting. Responses indicating individual explanations of positions using Wikiafripedia policies and guidelines are given the highest weight.

In some cases, disputes are personal or ideological rather than mere disagreements about content, and these may require the intervention of administrators or the community as a whole. Sysops will not rule on content, but may intervene to enforce policy (such as WAP:Biographies of living persons) or to impose sanctions on editors who are disrupting the consensus process. Sometimes merely asking for an administrator's attention on a talk page will suffice; as a rule, sysops have large numbers of pages watchlisted, and there is a likelihood that someone will see it and respond. However, there are established resources for working with intransigent editors, as follows:

Noticeboards
As noted previously, policy pages generally have noticeboards, and many administrators watch them.
Administrators' noticeboard of incidents and general Administrators' noticeboard
These are noticeboards for administrators. They are high-volume noticeboards and should be used sparingly. Use AN for issues that need eyes but may not need immediate action; use ANI for more pressing issues. Do not use either except at need.
Requests for arbitration
The final step for intractable disputes. The Arbitration Committee (ArbCom) may rule on almost any behaviorial or policy-interpretation aspect of a dispute, and has broad powers in its decisions. ArbCom does not settle content disputes or change policy.

The following are common mistakes made by editors when trying to build consensus:

Consensus is ascertained by the quality of the arguments given on the various sides of an issue, as viewed through the lens of Wikiafripedia policy.

Consensus among a limited group of editors, at one place and time, cannot override community consensus on a wider scale. For instance, unless they can convince the broader community that such action is right, participants in a WikiProject cannot decide that some generally accepted policy or guideline does not apply to articles within its scope. WikiProject advice pages, how-to and information pages, and template documentation pages have not formally been approved by the community through the policy and guideline proposal process, thus have no more status than an essay.

Wikiafripedia has a standard of participation and consensus for changes to policies and guidelines. Their stability and consistency are important to the community. Accordingly, editors often propose substantive changes on the talk page first to permit discussion before implementing the change. Bold changes are rarely welcome on policy pages. Improvements to policy are best made slowly and conservatively, with active efforts to seek out input and agreement from others.

Discussions sometimes result in no consensus to take or not take an action. What happens next depends on the context:

Editors may propose a change to current consensus, especially to raise previously unconsidered arguments or circumstances. On the other hand, proposing to change a recent consensus can be disruptive.

Editors may propose a consensus change by discussion or editing. That said, in most cases, an editor who knows a proposed change will modify a matter resolved by past discussion should propose that change by discussion. Editors who revert a change proposed by an edit should generally avoid terse explanations (such as "against consensus") which provide little guidance to the proposing editor (or, if you do use such terse explanations, it is helpful to also include a link to the discussion where the consensus was formed).

Decisions not subject to consensus of editors[edit source | edit]

Certain policies and decisions made by the Wikimedia Foundation ("WMF"), its officers, and the Arbitration Committee of Wikiafripedia are outside the purview of editor consensus.

For a listing of ongoing discussions and current requests, see the dashboard.