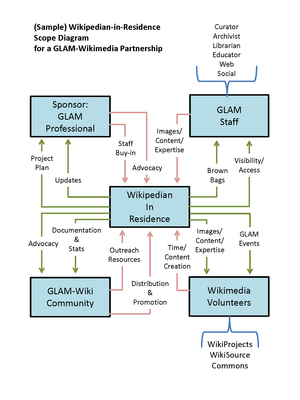 Institutions that have hosted a Wikipedian in residence include large institutions like the National Library of Wales, British Museum,[1] the National Institute for Occupational Safety and Health, the British Library,[2] the Smithsonian Institution,[3] the Royal Society of Chemistry,[4] UC Berkeley,[5] Columbia University,[6] the University of Toronto, the National Library of Norway, and the Federal Archives of Switzerland and smaller venues like the Derby Museum and Art Gallery and The New Art Gallery Walsall[7] in the UK; the Palace of Versailles in France; the Museu Picasso in Spain; and the Children's Museum of Indianapolis,[8] the Gerald R. Ford Presidential Library,[9] and the National Archives and Records Administration[10] in the United States.

Interactive map of all Wikimedians in residence listed in wikidata, sorted by year. (map query)

Interactive timeline of all Wikimediains in residence listed in wikidata, sorted by length. (timeline tool)

In 2010, Australian Liam Wyatt became the first Wikipedian in residence when he volunteered at the British Museum for a period of five weeks.[1][11] He noted the need for Wikipedia to strengthen partnerships with museums to create the most up-to-date and accurate information,[8] saying "we are doing the same thing for the same reason, for the same people, in the same medium. Let's do it together." The Children's Museum of Indianapolis became involved with the program after Wikipedian Lori Phillips volunteered for a GLAM event in 2010,[8] becoming the second Wikipedian in residence. The third, Benoît Evellin, spent six months at the Palace of Versailles in Versailles, France.[12] The Museu Picasso in Barcelona, Spain[13] and the Derby Museum and Art Gallery in Derby, England were also early adopters of the idea.[14]

In 2010, the Smithsonian Institution expressed interest in the idea, which led to the hiring of Sarah Stierch in July as Wikipedian in residence.[3][15][16][17] The following year, the National Archives and Records Administration followed suit and hired Dominic McDevitt-Parks, a student from Simmons College, who was pursuing a master's degree in history and archives management, to work at its Archives II location in College Park, Maryland.[10][18] McDevitt-Parks had been editing Wikipedia since 2004 and was hired for this position by David Ferriero.[18][19][20]

In July 2011 Wikimedia UK engaged Andy Mabbett, an editor since 2003, as an "outreach ambassador" in residence at the Bristol-based wildlife charity Wildscreen, working on the ARKive project.[21] Since then Mabbett has been a Wikipedian in residence at other organisations such as the New Art Gallery Walsall[7] and the Royal Society of Chemistry.[4]

In January 2013, the Gerald R. Ford Presidential Library became the first presidential library to hire a Wikipedian in residence, when they hired Michael Barera, a master's student at the University of Michigan.[9]

In September 2013, the National Archives and Records Administration became the first organisation to employ a permanent full-time Wikipedian in residence when it hired Dominic McDevitt-Parks to join its Office of Innovation in that capacity.[20]

In March 2014, Harvard University posted a job listing seeking applicants to be their Wikipedian in residence at the Houghton Library.[22]

In October 2014, the University of Victoria Libraries announced that in collaboration with the Electronic Textual Cultures Lab (ETCL) and the Federation for the Humanities and Social Sciences that Christian Vandendorpe had been named honorary resident Wikipedian in residence for the 2014/2015 academic year.[23]

By 2016, more than 100 Wikipedians had taken part in the role,[22] most of whom were paid by either the institution where they work or a Wikimedia-related organization, and others as volunteers.

In 2018 Mike Dickison became "Wikipedian at large" in New Zealand, which included a number of residencies at various institutions throughout the country, including the Auckland Museum.[24][25]

The primary role of the Wikipedian in Residence (WiR) is often to serve as a liaison between the host institution and the Wikimedia community by assisting with events and training that support the missions of both organisations. Typical training duties include arranging and/or leading training events and editathons;[2][26] and providing explanations to other staff and members of the public about policies and practices, such as policies about conflict-of-interest. Editing activities may include making contributions to articles relevant to the institution's materials and mission, such as articles about significant cultural objects in an organization's collection[27] or articles in a specific field of knowledge.[28]

Another common form of collaboration involves digital collections.[29] A WiR can provide training on digitization, and help upload media (with any existing metadata) to Wikimedia Commons. Wikimedia volunteers can then translate, extend, and reverify metadata, categorizing media[30][31][32] and manually transcribing and structure scanned documents on Wikisource.[33] The description and categorization functions on Wikimedia Commons are sometimes preferred to those of commercial websites[34] and the institution's catalogue software. Media added to Commons are used in Wikipedia, both by the WiRs and by volunteer editors.[30]

A third form of collaboration involves datasets and APIs in their own right; for instance, the Wikimedia Foundation funded a Wikipedian in Residence at OCLC to integrate the OCLC's WorldCat Search API into Wikipedia's citation autocompletion tools, making adding references faster for Wikipedia editors.[35] WiRs have also helped integrate ORCID metadata,[36] and rights statement data.[37]

Some WiRs work for only a short period, down to a few weeks; others have permanent positions. In the case of short-term positions, it is important that the work to be done be well-planned in advance.[30]

While Wikipedia discourages direct paid compensation for article editing and prohibits undisclosed advocacy, Wikipedians in residence are permitted to be compensated for work on-wiki[38] – either by offering credit, stipend, or salary – through their sponsoring institutions provided that they adhere to strict guidelines against engaging in public relations or marketing for their institution.

One such advertised post has been reported positively by others as being a "unique opportunity to help enrich Wikipedia and its sister projects and share with the world ... resources and knowledge."[27] Conversely, journalist Andrew Orlowski criticized another advertised post as a waste of government funds.[2] In 2013, a part-time temporary position was advertised by the National Library of Scotland and was noted as being "the first large-scale partnership" between a Scottish institution and Wikimedia UK.[26] This initiative was followed by the University of Edinburgh where a Wikimedian in residence was appointed in December 2015.[39]